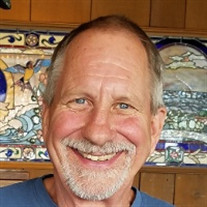 Obituary for BRIAN MICHAEL PLOUFF: Brian Michael Plouff, age 64 of Oakland, Oregon passed away at his home on July 27, 2019, in the loving arms of his beloved wife, Mary. His passing was peaceful and full of reassurances about what a wonderful, inspirational, loved man he was.Brian was born on May 12, 1955, in Roseville, Michigan to Herman and Cleo Plouff. When Brian was 12 his parents moved to Roseburg, Oregon, to join Herman’s brother Edward and his family. When Brian married his first wife, Terrie, he happily accepted the role of being a dad to her son, Jamey. The birth of their daughter, Heather brought him incredible joy. When Brian married his second wife, he helped raise her twin daughters, Candace and Crystal. He was very proud that they all called him Dad. In 1989 he started his own business, Plouff’s Excavation. He could make all of his excavation equipment do amazing things. During the first year of being in business, he felt honored that his retired dad worked with him every day, refusing any pay, to help the business get started. From 1990 to 1997 Brian was very involved in sprint car racing, first as a sponsor of the H&H car that won the track championship in 1991. Then from 1992-1997, he became a part-owner of that same car, winning another track championship. He loved his racing family, especially Dennis and Sharon and the Kulm and Morelock families. In 2000, Brian met Mary on a blind date set up by Candace. The date didn’t go well, but a month and a half later they reconnected and became inseparable. They were married on August 31, 2002. Their life together was full of love and joy. They shared everything, every step of the way – they were a great team. He often said Mary was the love of his life and she said the same thing about him. In 2014 Brian was diagnosed with pancreatic cancer. He never let the diagnosis stop him, calling it the terrorist inside his body. He underwent treatments, working them around the things he loved to do, especially traveling. He and Mary travelled with their trailer across the states to Nebraska, up to Alaska via the Al-Can highway to visit his mom and sister, to Arizona to see classic car auctions and many other destinations to visit family and friends. He was an avid hunter and continued to scout and hunt wild game right through 2018 with his son Jamey, his friends Charlie, Greg, Gary, Billy, and Lorne plus many other hunting buddies. When Brian realized his life was nearing its end, he declared that if there was going to be a Celebration of Life for him, he wanted to be there. His children, in just two days, put together a fantastic party – a real celebration, with Brian right in the middle of more than 75 people. Pictures were taken, toasts were made and lots of hugs and memories shared. At his request that was the only service that will be held. He is survived by his mother Cleo, wife Mary, siblings, Cheryl, Greg (Vicky), Michelle (Wes), children Heather, Jamey (Tracy), Crystal (Jade), Candace (Andy), a dozen wonderful grandchildren he loved dearly, numerous nieces and nephews and many close friends. He was preceded in death by his father Herman, his Uncle Ed and his sister Leslie. His motto to anyone battling cancer would be, don’t give up, look for answers and grab all the life you can. In his case, he and Mary were helped tremendously with advice from the Pancreatic Cancer Action Network (PANCAN.ORG). To send a flower arrangement or to plant trees in memory of Brian Michael Plouff, please click here to visit our Sympathy Store.

Obituary for BRIAN MICHAEL PLOUFF: Brian Michael Plouff, age 64 of Oakland, Oregon passed away at his home on July 27, 2019, in the loving arms of his beloved wife, Mary. His passing was peaceful and full of reassurances about what a wonderful,... View Obituary & Service Information

The family of Brian Michael Plouff created this Life Tributes page to make it easy to share your memories.

Send flowers to the Plouff family.