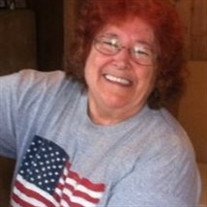 CATHERINE (KATIE) MAE FARLEY, age 71, passed away November 2nd in her Sutherlin home after a brave battle with cancer. Though her time with us was cut short, she had lived a full, active life that included many hobbies and activities such as ceramics, sewing, knitting, cooking, dancing and singing. Katie was a current and active member of the local Bluegrass group and Old Time Fiddlers Association. One of the many activities she enjoyed was traveling. She had lived in Alaska, Arkansas, California, Missouri, North Carolina and Oregon. She had also recently visited Hawaii, Korea, Germany and most of the 50 states. Katie's favorite traveling partner was her soul mate and husband, Ernest (Ernie) Farley of Sutherlin. Ernie and Katie were married on a Sunday afternoon, July 27, 2014. The two of them enjoyed getting away in their motor home to remote destinations or to the coast for a weekend of tuna fishing. Their last trip together was one to Brownsville, Texas with many stops to well known landmarks and family members. It was in Texas where Katie found out that stomach cancer had invaded her body. Through her endeavors with many tests and treatments, she was inspired to write and publish a short story about her experiences called "Snow Birds". Katie had lived and worked in and around the Roseburg area since 1974. She had a lot of friends and knew a lot of people. She had a great smile, loved to laugh and genuinely enjoyed life. Katie loved the holidays that included large gatherings of friends, family and home cookin. Thanksgiving and Christmas was a time of family and laughter. White elephant gift exchanges and various board games were some of her favorite things. It was also rumored that she knew Santa Clause. Katie is survived by her husband, Ernie Farley; mother, May Rowan; brother, Glen (Barbara) Harter; sister, Cassandra Harter; children, Robert (Julie) Knapp, Terry Knapp (Steve)Thomas, Glynda Tucker, Nancy Trotter and Susan (John) Hand. She is also survived by her immediate extended family on the Farley side, including step-children Jim (Mary) Farley, Doug (Rosa) Farley and Sherry Farley (Dan) Whetstone; no less than 11 grandchildren, 4 great-grandchildren, 5 granddogs and 3 grandkitties. A memorial service will be held on Saturday, November 7, 2015 at 4:30 p.m. at the First United Methodist Church located at 1771 W. Harvard Avenue in Roseburg. Please join us in her life celebration by wearing something red. It was her favorite color.

CATHERINE (KATIE) MAE FARLEY, age 71, passed away November 2nd in her Sutherlin home after a brave battle with cancer. Though her time with us was cut short, she had lived a full, active life that included many hobbies and activities such as... View Obituary & Service Information

The family of Catherine Mae Farley created this Life Tributes page to make it easy to share your memories.

Send flowers to the Farley family.