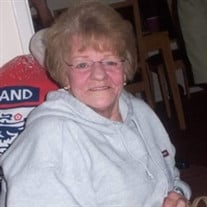 DEE ANNE WINN 1948-2014 DEE ANNE WINN, age 66, went to our heavenly Father in the early hours of Tuesday, the 30th of December, 2014. She passed away at Umpqua Valley Nursing Rehab Center in Roseburg, OR while recovering from a chronic illness. She was born on the 29th of December, 1948, in Newport Beach, CA and was the second of three children born to Francis Leon Owens and Mildred Naomi Price. She graduated from Newport Harbor High School in Newport, CA in 1967. Dee spent most of her life serving others through different methods. She was a selfless, devoted and loving person who cared and worried about everyone, whether she knew them or not. She married her husband and partner for life, Dudley Winn, at Folkestone in Kent, in the United Kingdom, on the 17th of December, 2001. They made their home in England for 11 years and eventually retired in Sutherlin, Oregon. Dee was a loving wife, homemaker, mother, sister, friend, cousin, and grandmother. Dee was preceded in death by her mother, Mildred Naomi Reynolds of California; sibling, Victoria Johnson and her husband Bob Johnson of California, and her loving husband of 13 years, Dudley Winn. Her brother, Randall Owens of California preceded her in death in 2009. Dee is survived by her son, Shawn Michael Richards of Ohio and daughter-in-law Rebecca Richards; son, Aaron Daniel Richards of Florida and daughter-in-law Korissa Richards; daughter, Shannon Michelle Udland of Texas, and son-in-law Aaron Udland; son, Randall Shane Richards of Oregon, and ex-husband and good friend, Ronald Eugene Richards of Oregon. She was also preceded in death by her cousins in California and by her ten grandchildren that she loved very much, with one on the way, throughout the United States and the UK. Remembering her will always bring a smile. Dee wished to be with her beloved pet Rosie that passed away before her. She rescued Rosie along with her husband Dudley. Friends are cordially invited to pay respects to the family of Dee by visiting her Memorial Page and leaving condolences or lighting a candle on the page in her memory. Dee's wish was not to have a service. In lieu of customary remembrances, memorials or donations may be made to the Wounded Warriors or St Jude's Children's Hospital.

DEE ANNE WINN 1948-2014 DEE ANNE WINN, age 66, went to our heavenly Father in the early hours of Tuesday, the 30th of December, 2014. She passed away at Umpqua Valley Nursing Rehab Center in Roseburg, OR while recovering from a chronic illness.... View Obituary & Service Information

The family of Dee Anne Winn created this Life Tributes page to make it easy to share your memories.

Send flowers to the Winn family.