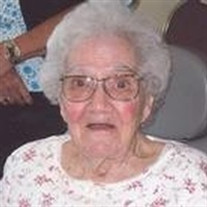 DOROTHY K. WOLFF 98 formally of Sutherlin, Oregon passed away Sunday, August 5, 2012 in a Roseburg Nursing Center. She was born June 8, 1914 in St. Joseph, Missouri to Harry E. and Gladys L.(Ranney) Conrad. The Conrad family moved to the Coquille, Oregon area when Dorothy was a small child. On August 9, 1932 in Medford, Oregon she married Edward E. Wolff who preceded her in death in 1987. The Wolff's moved from Medford to Sutherlin, Oregon in 1950. Dorothy worked as a telephone operator at Camp White during WW II. She worked at J.C. Penny's and was an original sorter for Harry and David's prior to moving to Sutherlin. Dorothy worked at O.L. Torrey's in the 50's and at Sandy McBride's Western Auto during the 60's. She enjoyed gardening, sewing, knitting, crocheting, writing poetry and was a member of the Garden and Quilters Clubs. Survivors include her daughters Elois Barshaw of Lakeside, Oregon, Elizabeth Heishman of Sutherlin, Oregon and Bonnie Schroeder and her husband Larry of Roseburg; 10 grandchildren, 12 great grandchildren and 5 great great grandchildren. At Dorothy's request, no service will be held. "True Friends" By Dorothy Conrad-Wolff I wish to extend best wishes, To all friends so tried and true, The ones to receive these wishes, Dear friend it is you. Dearest friends, it is known, For friends are very rare; Are not like the hay unsown, Growing every-where. I regard you as a precious gem, The most precious God can make, It is very hard to find them, And like true friends, are hard to break. In life's pathway, I know you are A true friend when in need, But my dear, just bare in mind, A true friend is a friend indeed.

The family of Dorothy K. Wolff created this Life Tributes page to make it easy to share your memories.

Send flowers to the Wolff family.