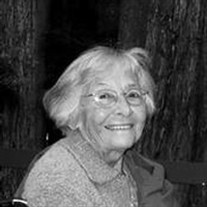 Emma Marie Gray, age 87, passed away at home in Oakland, April 14, 2012. Emma was the daughter of August and Pearl Brandner (Finch), sister to Grace Crouch and the late Lowell and Dan Brandner. She was deeply loved by her late husband, Hugh Lahey Gray and their 6 children. Emma was born and raised on a farm near Selkirk, KS. She attended the University of Minnesota, Kansas State University, and Pfeiffer College and taught school in rural western Kansas. She married Hugh in 1947 and they moved back to Selkirk to farm. Emma became a full time mother and caregiver to her family. Together, they raised six children and farmed full time. In 1969, the family moved to Oakland, Oregon to be near relatives from both sides of the family, and so Emma could help her sister care for their elderly mother. Emma was a life-long member of the Presbyterian Church (USA) and was active at the Oakland church since moving here from Kansas. She had a strong and unwavering faith and in her own words, "this Christianity is very rich stuff, too rich for ordinary mortals" Emma was deeply devoted to her family and had great wisdom as a mother, teacher and friend to each of her children and grandchildren. After her children were grown she studied library science, theater and women's studies at the University of Oregon. Emma was an avid reader, a writer and a poet. She loved drama, literature, music, politics, history, animals and nature. Whether exploring the windswept prairie, hiking the NW forests or walking along a beach --- whether flying in a small plane, riding in the mountains, or driving to the highest, darkest spot to see a meteor shower in the middle of the night, she was always ready for an adventure with one of her children. Emma was a kind, loving, and beautiful soul who touched the hearts and lives of everyone who knew her. She had a deep concern and interest in literally everyone she knew, and had a special way of placing herself in another person's shoes regardless of their plight. She had a passionate concern for the poor, the hungry and many social issues -- especially those concerning equality of gender, race, age and education. Emma leaves behind six children: James Gray (Fran), John Gray (Barbara Corson), Tom Gray (Catherine Marzyck), Tim Gray (Patty), Mike Gray (Kim), Debra Gray (Ron Armstrong), nine grandchildren, five great-grandchildren, seven step-grandchildren, and 13 step-great-grandchildren, her sister, Grace Crouch and many nieces and nephews. All were her treasures. Emma shared a special bond, much laughter and many good times with her son-in-law and fulltime caregiver of the last five years, Ron Armstrong. Memorial donations can be made in Emma's name to the Oakland Community Presbyterian Church or "Ode" magazine 268 Bush St. #4419, San Francisco, CA 94104, one she thought shared her hope and optimism for the future of our world. A public Celebration of Life Service is planned at the Oakland Presbyterian Church on June 9 at 2:00 p.m.

Emma Marie Gray, age 87, passed away at home in Oakland, April 14, 2012. Emma was the daughter of August and Pearl Brandner (Finch), sister to Grace Crouch and the late Lowell and Dan Brandner. She was deeply loved by her late husband, Hugh... View Obituary & Service Information

The family of Emma Marie Gray created this Life Tributes page to make it easy to share your memories.

Send flowers to the Gray family.