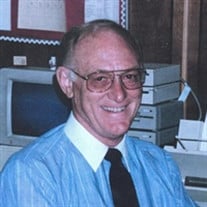 Gary passed away on Friday, April 18, 2014. He was born in La Grande, OR, on August 5, 1936, to Millicent V. Price and Elvin E. King. As a young man, Gary played high school and college athletics. Gary shared a love of horsemanship with his step dad Joe Bob Price. Gary married his high school sweetheart, Joann A. Knighten on 7-7-57, this was a match made in heaven for 56 years. Out of this union came a daughter, Tammy Jo born in 1961 in Coronado, CA, and a son Christopher Gary in 1964 in Roseburg, OR. In 1959 Gary graduated with a Bachelor's degree in education from Eastern Oregon College and then received his Master's degree from EOC in 1969. His first teaching position was in Ukiah, Oregon. After one year Gary was accepted at Naval Officer Candidate School in Newport, RI, where he received his commission of Ensign. Gary's Naval career took him on many different ships. He served on the Admiral's staff at North Island Naval Air station in Coronado, CA. Gary's naval career continued in the Naval Reserves for 27 years where he commanded the Naval Reserve units in Roseburg and Eugene. Gary retired with the rank of Captain. Gary's career in education brought him to Sutherlin in 1963. Gary shared his love of children and his many talents in reaching them for 30 years with the Sutherlin School District. He served as Science teacher, Counselor, Coach, Athletic Director, High School Principal and East Primary School Principal. Gary was a devoted husband and loving father and grandfather. His family was most important to him. Many wonderful times fishing, camping, crabbing, hunting, and holidays were shared with his two brothers and their families. Gary enjoyed all life had to offer and some of his many hobbies include master gardening, golfing, fishing, silversmithing, playing guitar and singing. Gary was awarded Sutherlin's Educator of the Year, and served as Sutherlin City Councilman. He was a member of, Lions, Elks, Moose and Roseburg Country Club. Upon retirement, Gary and Joann loved traveling and spending time with family and friends. Gary was a loving and doting "Papa" to his two grandchildren Lindsey and Garrett. His love and guidance had significant impact in both their lives. Gary is survived by his wife, Joann; daughter, Tammy Hodson (Gary); son, Chris King (Mary); grandson, Garrett King; granddaughters: Lindsey Hemming (Mitch), Chelsie Wilson; great-grandchildren: Marley Wilson, Christopher and Aurora Hemming; brothers: Monte King (Linda), Terry King (Diane); nieces and nephews: Natalie, Troy, Kim and Greg and their families. A memorial service will be held at Sutherlin Family Church, Friday, April 25, 2014, at 1 p.m. Graveside service to follow at VA National Cemetery in Roseburg. Memorial Donations may be offered to : East Primary PTO, %Gary King Backpack Fund, 323 E. Third St., Sutherlin, OR 97479. Please visit Gary's web site at www.sutherlinchapeloftherosesfh.com to leave a condolences for the family and sign the on line guest book Sutherlin Chapel of the Roses.

Gary passed away on Friday, April 18, 2014. He was born in La Grande, OR, on August 5, 1936, to Millicent V. Price and Elvin E. King. As a young man, Gary played high school and college athletics. Gary shared a love of horsemanship with his... View Obituary & Service Information

The family of Gary Elvin King created this Life Tributes page to make it easy to share your memories.

Send flowers to the King family.