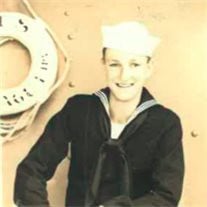 Our precious father, wonderful brother, beloved Uncle, and dear friend James Samuel, "Sam'' Young went home to be with his Lord and Savior on January 26, 2020. We are sure that his bride of 71 years took his hand as he entered the heavenly realm. Dad... View Obituary & Service Information

The family of James Samuel "Sam" Young created this Life Tributes page to make it easy to share your memories.