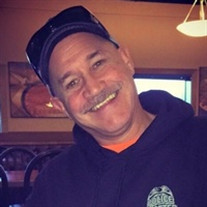 Joseph Elwood Felix, born October 19, 1961 in Arcadia, California, passed away peacefully in his sleep on March 24, 2015 while in Haiti serving his mission for the United Nations. Joe attended Rowland High School in Rowland Heights, California. He proudly served in the United States Army Reserve from November 1980 to November 1986. He was also a member of the United States Army National Guard from October 1994 to October 1997. Joe pursued his dream and graduated from the San Bernardino Police Academy in 1990. He initially worked for the Winston Police Department from June 1996 until December 2002. While with the Winston Police Department he served as a patrol officer, the School Resource Officer, and as the department's Detective. While a Detective, he served on the Douglas County Major Crimes Team. Joe later worked at Sutherlin Police Department from December 2002 until he retired at the rank of Sergeant in April 2014. During his career for the City of Sutherlin he served as a patrol officer, a Douglas County Interagency Narcotics Team member, and was promoted to the rank of Corporal in early 2004, and to the rank of Sergeant in late 2004. Joe also served as the Interim Police Chief in 2012 for the City of Sutherlin Police Department. Joe received many awards during his career in law enforcement. Most notably, the Silver Star of Bravery in 2000 for an officer involved shooting. In April 2014, Joe accepted a position with DynCorp International as a Police Advisor. He was stationed in Haiti and assisted with the professional training of the Haitian Police. At the time of Joe's passing he was excited to be working on his Bachelor's Degree in Criminal Justice. Joe enjoyed spending time with his wife and children. Some of the best memories were made during family road trips singing out loud and enjoying life. Joe also enjoyed coaching sports, motorcycle racing, auto racing, watching his youngest son race dirt bikes and karts, spending time with the family horses, cooking, golfing, scuba diving, and most of all making sure his family was happy. Joe worked hard and always provided nothing but the best to his wife and children. Joe's life would seem too short to many, but those who were touched by him understood that the quality of existence far exceeds the quantity of time in which one lives. His gentle smile brought so much joy to our family. He gave us all such courage and hope and reminded us of the preciousness of life. He was an amazing husband, father, son, brother, and loyal friend. He lived his life ready to help everyone. He knew life wasn't about where you came from or even where you end up but about the journey in between and Joe lived that journey full throttle. Joe always said "Live life on the edge because standing in the middle is just too boring". He is survived by the love of his life, Dena Felix, whom he so adored; his loving children who were his pride and joy: Devon Felix, Kayla Felix, Sean Belveal, Brooke Yarbrough, Dylan Felix, Justin Felix and Jessica Felix; and the loving son of Ruth Rubalcava; his brothers Michael Felix and Steven Felix; his sisters Maria Rubalcava and Drinda Lemon. His father, Fernando Felix, preceded him in death in 2013. He will be deeply missed by us all. Funeral services will be held on April 8, 2015 at 1:00 p.m. at Sutherlin Family Church located at 878 W. Sixth Street, Sutherlin. Please visit Joe's website at www.sutherlinchapeloftherosesfh.com to leave condolences and fond memories. May your journey continue in peace.

The family of Joseph Elwood Felix created this Life Tributes page to make it easy to share your memories.

Send flowers to the Felix family.