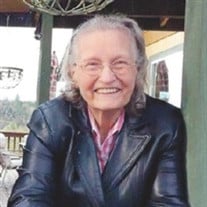 June E. Fugate-McCratic was born to Emil and Lucille Frable in Middle Inlet, Wisconsin January 20, 1932. June went to be with the lord on March 25, 2016. She succumbed to complications from late onset Alzheimer's Disease She was preceded in death by her husband Robert Junior, son Ronald Allen and son Robert Gerald. she is survived by four of her children Tom Fugate, "Maxine", Ella Bishop "Joe" , Carol Moore "Rick" and Tammie Boyd. Twenty grandchildren and twenty five great grandchildren , two great, great grandchildren more coming. June was the youngest of eleven siblings. She lived with her parents on working dairy and truck farms during the early years of her life. Her family moved to Wisaukee , Wisconsin when she was in her teens. She accompanied her parents and her sister Helen. She and Helen soon became acquainted with the Fugate family and went to school with two of their children, Wesley and Lucille. The two older Fugate brothers Clifford and Robert "Junior" were working in the woods. Clifford joined the CB,s and was gone for a while until WWII was over. He came home and started dating the older sister Helen. Time went by and Clifford and Helen set June and Junior up for a date. They never stopped seeing each other after that. Clifford and Helen decided to get married. It wasn't too long after that before June and Junior wanted to get married, but June was too young. They waited and went to Michigan with June's mother not long after she turned sixteen to be married. They were married almost 54 years and had six children, Tom, Robert, Ella, Ronald, Carol and Tammie. They lived in the Oakland and Sutherlin area for 49 years before Juniors passing in 2002. They moved to Oakland beckoned by Junior's uncle Leonard Whitaker who had moved to Oregon previously. They moved here along with cousins Gene and Don Whitaker. Clifford and Helen followed soon after. They had the support of many of their relatives who also had moved here in the 1940's. Long time neighbors Herman and Elisabeth Fugate sold them a building lot next to them. This was by the Oakland High School. They built their family home and lived there forty three years. Their children all graduated high school from Oakland. June was a loving mother who worked very hard throughout her life. She was not only a housewife, but worked for Martin Box Container Corp. in Oakland for a while. She was the bookkeeper for her and Robert's logging business. She was a seamstress who designed, sewed, fitted clothes for Wheelies Bent Wear, who provided manufactured clothing for people confined to wheel chairs. She sewed many clothes and specialty dolls for her children and grandchildren. The last two years of her life she lived with her daughter Carol Moore until she passed. Carol provided her companionship and loving care throughout her fight with Alzheimer's disease. She administered her home health needs through several months of ongoing pain and suffering. June was a faithful member of the Calapooia Free Methodist Church. She was very involved with her church and her church family. She had many close friends from this family.

June E. Fugate-McCratic was born to Emil and Lucille Frable in Middle Inlet, Wisconsin January 20, 1932. June went to be with the lord on March 25, 2016. She succumbed to complications from late onset Alzheimer's Disease She was preceded in... View Obituary & Service Information

The family of June E. Fugate-McCratic (Frable) created this Life Tributes page to make it easy to share your memories.

June E. Fugate-McCratic was born to Emil and Lucille Frable in...