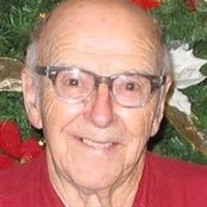 LaVerne D. Murphy LaVerne D. Murphy of Umpqua, 96, died in Mercy Medical Center at 1:35 AM on November 18, 2011. He had been surrounded by friends and family over the last few weeks. LaVerne Murphy was born in Umpqua, Oregon Sept. 7, 1915 to Henry and Anna Murphy. In 1920 they moved to Globe, Arizona for Henry's health. They lived there until Henry's death in March 1923. A few months after returning to Umpqua, the family moved into a home on the Murphy farm, then owned by Henry's brother-in-law, Bud Good. LaVerne went to his first two years of school in Globe Arizona, finished grade school at Coles Valley one room school house in Umpqua and on to graduate from Sutherlin High School in1934. After the death of his stepfather Bud Good in 1937, he started farming the home farm with his Mother. Over the years, LaVerne worked with the Douglas County Extension Service and Oregon State University growing and harvesting Sub Clover seed. LaVerne married Meryl Ethun of Sauk Centre, Minn. May 17, 1944 at St. Paul Lutheran Church, Roseburg, Oregon. They were inseparable, even during her extended struggle with Alzheimer's. Meryl died peacefully at Callahan Court in Roseburg, November 4, 2008. LaVerne was very active in his Church. He helped build St. John's Lutheran Church in Sutherlin and served as a Charter Member. He also served many years as Sunday School Superintendent and also with Meryl as Youth Group Leaders. He was acknowledge state wide for his leadership in Education. He served on the Umpqua School Board from1950-68, Douglas County School Reorganization Committee from1957-62, helped organize Umpqua Community College in 1964 and served on its Budget Committee until 2011. He was elected to the Douglas Education Service District Board (ESD) in 1976 and served until 2001, served three years on the State ESD Executive Committee and as Vice President 1991 and President in 1992. LaVerne was very active in his Community. He served on the Douglas Electric Cooperative Board 1962-1969, the Farm Home Administration Committee 1969-1971, the Board of Directors of Douglas County Livestock Association and was elected President 1969. He championed the efforts of the Douglas County Lamb Show serving as Publicity Chair 1974-2008 and the Roseburg Ram Sale Committee 1970-1992. LaVerne and Meryl put on the barbecue for the Ram Sale for a number of years. He also served a three-year term on the Douglas County Farmers Co-op Board and on the Douglas County Fair Board 1985 -1991. Along with Meryl, he designed and displayed the Douglas County Booth at the State Fair for sixteen years. His awards are numerous. He received the Meritorious Service Award for outstanding service to Oregon Education from the Oregon Association of Education Service Districts in 1989. He loved the Future Farmers of America and was made Honorary Member of the Sutherlin Chapter and also received the Honorary State FFA Degree in 1991. He became Honorary Life Member of the Sutherlin Chamber of Commerce for the help with the Sutherlin Information Center. As a member of the Douglas County Chamber of Commerce, he received the Chamber's Volunteer of the Year Award in 1985. In 1990, he received Roseburg Chamber's First Citizen Award and in the same year was named to the OSU Diamond Pioneer Agricultural Award. LaVerne was very proud when he received the Confederation of Oregon School Administrators Distinguished Education Service Award in 1991. His love has always been for Umpqua Community College. In 1993 LaVerne was awarded The Spirit Of Umpqua with his picture in the Lobby of Jacoby Auditorium. He was also pleased when he was named "King of Sutherlin" at its 150th Anniversary and served as Parade Marshall. His Saturday E-mail...Good Morning From The Murphy Farm has been very popular and published in Douglas County News. He became one of the paper's "reporters" at 94 years old. His funeral services will be held at St. John's Lutheran Church, 1106 W. 6th Ave, Sutherlin, OR at 2 PM, November 27, 2011 and the "Celebration of Life" begins at 3 PM in Sutherlin at Umpqua Golf and RV Resort, 1919 Recreation Lane. It was LaVerne's wish that in lieu of flowers, a donation could be made to The LaVerne and Meryl Murphy Memorial Scholarship at UCC. Checks should be made to Umpqua Community College Foundation with a memo noting LaVerne and Meryl Murphy Scholarship. Please mail to UCC Foundation, Laverne and Meryl Murphy Scholarship, PO Box 967, Roseburg, OR 97470. He is survived by his nieces and nephews, Barbara and Huston Dickson and their children Melinda and Aaron Cubic; Peggy and Alton Clark and their children Melissa and Robert Freeman, Jeff and Christina Clark and Tim and Nikole Clark; Bill and Kathy Murphy and their children Gary and Shana Murphy, Patrick and Robin Murphy, Kelley Rae and Frank Jarvis and Wyndee and Shaun Konopaski; Pat and Barbara Murphy and their children Shannon and Tracy Grauf, Jim Murphy and Jon and Brandi Murphy; and Bill and Elin Miller and along with 20 great nieces and nephews. His extended family is Wayne and Marlene LoPera, Mike and Connie LoPera, Michelle and Ed Ottenheimer and children Jennifer and Jesse Chastain, Jody and Eric Zurita, Bryce Rogers, Brent and Shawnee Rogers, Jordan and Cole Russell, Blake Dallas Rogers, Natalie Ottenheimer and Edward Ottenheimer.

LaVerne D. Murphy LaVerne D. Murphy of Umpqua, 96, died in Mercy Medical Center at 1:35 AM on November 18, 2011. He had been surrounded by friends and family over the last few weeks. LaVerne Murphy was born in Umpqua, Oregon Sept. 7, 1915 to... View Obituary & Service Information

The family of LaVerne D. Murphy created this Life Tributes page to make it easy to share your memories.

Send flowers to the Murphy family.