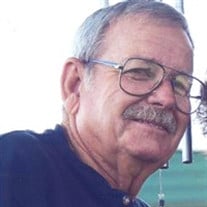 Age 70, passed away Saturday, November 3, 2012 at his home in Sutherlin, Oregon. Randel was born in Caddo, Oklahoma to W.A. and Theresa Lillard on May 17, 1942. He has lived most of his years in Sutherlin where he met and married the love of his life, Patsy Scevers. Ray spent many years working in the timber industries. He logged for the Leatherwoods and other companies and then retired from Sun Studs in 2009 after almost 25 years. He enjoyed hunting, fishing, and just plain being outdoors. Ray has spent his few years of retirement working around his ranch and church, spending time with his wife, and pestering his grandkids and Lois. Ray has served the Lord for the last 51 years under the ministries of Rev. Therman Scevers, Rev. Ed Scevers, Rev. Doyle Pooler, and currently under the ministry of Rev. Ron and Ruth Scevers at the Yoncalla Assembly of God. He raised a family built on faith and led a life being a rock for everyone around him. Ray has played a big part in many peoples lives and has been the best husband, dad, papa, great papa, and friend in the whole world. There are no words to describe how greatly he will be missed. He is survived by his wife Patsy of 51 years; his children, Annette Finnie of Sutherlin, Lynette (Mark) Fugate of Sutherlin, Travis (Kristina) Lillard of Glide; grandchildren, Amber (Travis) Thiessens, Ashley (Scott) Faircloth, Bryant (Ashley) Fugate; Chad Fugate, Ryan Fugate, Madison Lillard, Emily Lillard, Bryson Lillard, Brock Lillard; great-grandchildren, Jayden, Kennedi, and Aiden; brothers and sisters, Louise Miller of North Carolina, Donald Lillard of North Carolina, Anne Brookbank of Sutherlin, Frances (Jess) Terrell of Sutherlin, Margie (Roger) Hazzard of Sutherlin, Jerry-Paul (Flossie) Lillard of Roseburg, Brenda Lillard of North Carolina; and his loyal old horse, Joe. Ray was preceded in death by his parents W.A. and Theresa Lillard; a brother Pete Lillard and sister Beverly Lillard. A memorial service will be held in his honor Saturday, November 10, 2012, 3 p.m. at the Yoncalla Assembly of God.

Age 70, passed away Saturday, November 3, 2012 at his home in Sutherlin, Oregon. Randel was born in Caddo, Oklahoma to W.A. and Theresa Lillard on May 17, 1942. He has lived most of his years in Sutherlin where he met and married the love of... View Obituary & Service Information

The family of Randel Ray ""Raymo"" Lillard created this Life Tributes page to make it easy to share your memories.