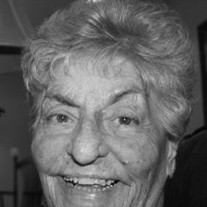 Virginia "Ginny" Bates Age 86, beloved wife, mother, grandmother, great-grandmother, sister, aunt, and friend passed peacefully on Saturday, April 30, 2016. The fifth of 13 children, Ginny was born to Hubert and Eva Stone in Rock Creek, Wyoming, on September 17, 1929. As a young girl, Ginny and her family moved to Concord, California. It was there, while working at the ticket booth at the local movie theater, that she caught the eye of Russell Bates. They were married on March 26, 1949, and had just celebrated their 67th anniversary. This union produced four children, Kathy (Harry) Hankins, Rick (Kathy) Bates, Karen (Ted) Lunsford, and Terri (John) Weaver; nine grandchildren; and 22 great-grandchildren. In the summer of 1969, Russ and Ginny, along with three younger children, moved to Sutherlin, Oregon. Ginny worked as the secretary to the principal at Sutherlin High School for 12 years, and worked as a bookkeeper for several local businesses. As a member of the LDS church Ginny faithfully served in numerous positions, which brought her great joy. Ginny enjoyed life to the fullest, attending any events that involved her children or grandchildren. Her love of children prompted Ginny to volunteer for the SMART program at the elementary schools in Oakland and Sutherlin for several years. She was a fiercely loyal and loving wife, mom and grandma. Her family and many others will miss her deeply. Ginny is survived by her husband Russ; their four children; nine grandchildren; two sisters Mary Lou Milina and Evelyn Palmer; and her adopted family at Chantelle's Loving Touch Memory Care facility. Ginny and her family were so blessed by the excellent care and exceptional love that the facility provided over the past three years. Thank you so much! Please join us in celebrating Ginny's life on Saturday, May 7, 2016, at the Sutherlin LDS church on St John Street. Viewing from 10 a.m. to 10:45 a.m., celebration at 11 a.m., with lunch to follow. In lieu of flowers, please make a donation in Virginia's "Ginny" name to the Alzheimer's Association.

The family of Virginia A. "Ginny" Bates (Stone) created this Life Tributes page to make it easy to share your memories.