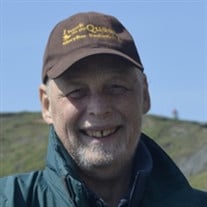 Wayne Nelson Hitchings April 17, 1945 - September 5, 2016 Red Hill entrepreneur Wayne Hitchings died peacefully with his family at his side at Mercy Hospital in Roseburg, Oregon. A celebration of his life will be held on Sunday, September 18, 2016, 2 pm at the Sienna Ridge Wine Tasting Room near the I-5 Rice Valley exit. Born in Lynn, Massachusetts, Wayne grew up in nearby Saugus and graduated from Saugus High School in 1963. At a young age, Wayne learned to immerse himself into subjects of diverse interest, a talent that served him well throughout his life. At a young age, he and his father became avid crystal collectors, filling their home with interesting geological finds from around the world. Wayne married Charlene Davis (nee Crowell) before joining the US Army during the Vietnam War era. He was based in New York City NY and later at Fort Richardson in Anchorage, AK where he was a missile tracking operator. Enthralled with the incredible beauty of Alaska's natural resources, Wayne stayed in Alaska after his military service and began to raise a family while pursuing myriad interests such as wildlife photography, hunting, fishing, flying and designing and building his own home. Wayne also had a natural talent for business, and after partnering with others launched Replacement Glass Company and later Architectural Supply Company, which is now owned and managed by his daughter Jennifer. His love of sailing transported him on an 18-month adventure to the South Pacific where he adopted a Farkarava youth, Tuhoe Tukerio. In the early l990s Wayne seized an opportunity to purchase a property with seven acres of vineyard. Over the next 20 years he developed it and adjoining properties into Red Hill Vineyard, after which he renovated the old John Long Farmhouse into the Sienna Ridge Tasting Room. Though he never spent the required time to pursue higher education, Wayne was considered brilliant by all who knew him. He attracted and befriended a host of successful people from many walks of life, and his uncompromising approach and the courage to pursue his desires gave him a full life that can be matched by very few. Wayne is survived by his current wife of 31 years, Glenda Dodson, his mother Marjorie Hitchings; daughter Jennifer Mattingly, her husband Shane and granddaughters Darby, Shelby, and Abby of Anchorage, Alaska; son Garth Hitchings and his wife Diana de Fazio of Walton, Oregon; Brett Dodson of Anchorage, Heather Dodson of Arlington, Va, and several nieces and nephews. Wayne was preceded in death by his father Lesley Hitchings of Saugus, Massachusetts and by his brother Gary C. Hitchings of Anchorage, Alaska. Donations in Wayne's honor will be accepted by the American Cancer Society.

Wayne Nelson Hitchings April 17, 1945 - September 5, 2016 Red Hill entrepreneur Wayne Hitchings died peacefully with his family at his side at Mercy Hospital in Roseburg, Oregon. A celebration of his life will be held on Sunday, September... View Obituary & Service Information

The family of Wayne Nelson Hitchings created this Life Tributes page to make it easy to share your memories.

Send flowers to the Hitchings family.